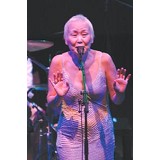 Sainkho Namtchylak is a singer originally from Tuva, a small autonomous Russian republic just north of Mongolia. She is known for her Tuvan throat singing or Khöömei.

Sainkho Namtchylak is an experimental singer, born in 1957 in a secluded village in the south of Tuva, an autonomous Russian state bordering Mongolia. She has an exceptional voice, spanning seven octaves and proficient in overtone singing; her music enmeshes avant-jazz, electronica, modern composition and Tuvan influences. In Tuva numerous cultural influences collide: the Turkic roots it shares with Mongolia, Xinjiang Uighur and the Central Asian states; various Siberian nomadic ethnic groups, principally those of the Tungus-Manchu group; Russian Old Believers; migrant and resettled populations from the Ukraine, Tatarstan and other minority groups west of the Urals. All of these, to extents, impact on Sainkho´s voice, although the Siberian influences dominate: her thesis produced while studying voice, first at the University of Kyzyl, then in the Gnesins Institute in Moscow during the 1980s focussed on Lamaistic and cult musics of minority groups across Siberia, and her music frequently shows tendencies towards Tungus-style imitative singing.

After graduating, Sainkho worked with several ensembles: the Moscow State Orchestra; the Moscow- based jazz ensemble ´Tri-O´ (since 1989); School of Dramatic Art under the direction of Anatoly Vasiliev (Moscow), various orchestras in Kyzyl although (incongruously) as far as I am aware she has not worked with the Sayaan Ensemble, the Tuvan ´folkloric orchestra´- a far less sanitised example of folk baroque than, say, existed in pre-independence Kazakhstan- that has housed many of Tuva´s other important singers. However, for several years Sainkho annually invited foreign musicians to Tuva to promote Tuvan culture. In 1997, Sainkho was horrifically attacked by Tuvinian racketeers which left her in a coma for two weeks. Again, sources regarding this contradict- others maintain that she underwent surgery for a severe malignant brain tumour; regardless, 1997 marked an appreciable change in her life. Since then, she has been resident in exile in Vienna, and has also recorded more prolifically as a solo artist- although she has released over thirty albums in the past twenty years, only seven have been entirely solo. in 2005 Italian publish house Libero di Scrivere released a book of poetry "Karmaland". In 2006 in Petersburg was published a book "Chelo-Vek" (in Russian, "A Human Being") in Russian, Tuvinian and in English.